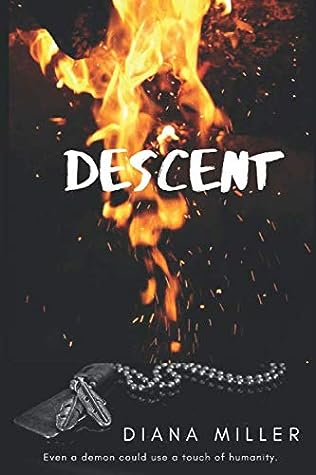 It is so hard to find a fresh take on anything these days, so when I find a book that gives me a unique concept and a nontraditional approach to the central romance, I am so here for it! In Descent, Diana Miller brings us into a secluded academy in the Pennsylvania mountains, where the supernatural finds a chilling home.

After her family is killed in a car accident, Sera moves in with her aunt a few thousand miles away, and is quickly selected to attend St. Michael’s Academy. Handpicked by the headmaster’s grandson after a chance meeting, she finds herself in the middle of disputes centered around status and rank within the school and the families of the students. Sera quickly realizes that she, like most of the students, is somehow more than an ordinary girl. She begins to manifest powers she never knew about, which is fortunate because her classmates are mostly high-ranking and powerful demons.

Miller provides a fun and new take on demons and how they were created, combining elements from Christianity with other religions and mythologies to create an entirely unique system. The relationships Sera builds with her classmates, in particular her friend Abby- who has no idea she lives in a school of demons- and a group of Alpha and Beta demons which includes Justin, the headmaster’s son and generally recognized leader of the student body, is fascinating to read. The tension between Justin and Sera left me torn between wanting them to get together and for them to stay far away from each other.

I couldn’t put this book down. It was an absolute page turner, and the writing was beautiful. The characters felt real and Miller did an incredible job of giving each one a distinct and recognizable personality that shone through her writing. The pacing of the plot kept me hungry for more, and I adored the take on demons that, just like in real life, turns the concepts of evil and good on their heads and will have readers clamoring for the sequel!